Over the last few months, I have been obsessed with roads. And not just roads, but also tracks, lanes, byways, and paths - in fact the smaller the road, the more interesting it seems to become.

It really all began with two things: a holiday in Devon and Robert Macfarlane's wonderful book, The Old Ways. 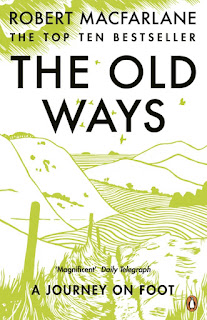 In his book, Macfarlane tells the stories of journeys he has made along some of this land's oldest paths, such as the Icknield Way and the Ridgeway. As he walks he discovers the events, people and tales which have shaped (and been shaped by) the landscape through which the paths run.

It's a beautiful book: a mixture of poetry, documentary, history, cartography, nature-writing and autobiography. I read it with a sense of yearning for the road, and for the mystery into which the ancient paths lead us. And now that I've finished the book, I find myself poring over maps to discern where these old roads run, like pencil lines half-erased from tracing paper.

Mid-way through Macfarlane's book, I spent a week in Devon, where single-track lanes are the everyday highways for local residents and tourists alike. On turning right out of our cottage door, we quickly became the lone walkers on a track through an Oak wood. In response to the silence and the coolness of the mossy path, I took off my shoes and walked the track barefoot, as one would a medieval labyrinth.

At the sound of the Wren, I stopped, and immediately became aware of my role as the visitor, and her place as the resident. I made an offering to the wood and its creatures from my flask of water, the only gift I had with me, and felt at once both at home and a stranger there. The path led on, but I had come far enough for now, and turned back for home. As the Summer fades and the seasons turn, I feel that must go back again, to walk that path into the past and into the future.