The Wisdom of Brigid

This Friday, 1 Feb, is the feast day of St Brigid. I have recently been delving into the legends of Brigid both as Christian Saint and as goddess, and find her fascinating and amazing! Her divine feminine wisdom and healing energy are very inspiring. At a time when the Christian Church (or, at least, my part of it - the Church of England) is failing to display true welcome and wisdom, Brigid's spirit is sorely needed. 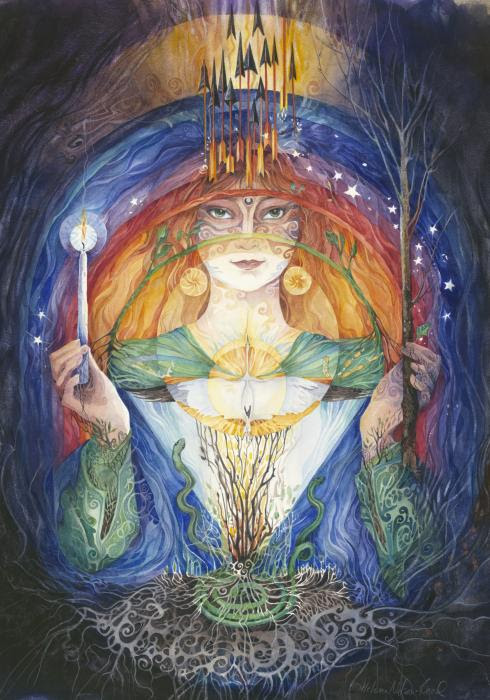 So, this week, we will celebrate St Brigid at the chapel Eucharist. Here is a brief extract from my short reflection for that morning:

Whatever may or may not be the historical facts about the life of Brigid, one of her most valuable gifts is that of feminine wisdom.

For too long, the Christian Church has silenced and ignored the voices of women whilst being happy for them to carry out a large share of the practical work which holds communities together - caring, praying, visiting, comforting, welcoming.

Brigid reminds us of the richness of the wisdom and vision of women - a richness which the Church desperately needs in order to open itself to the needs and wonders of our world.

May you be blessed by Brigid.

The art of avoiding

On Elephant Journal today - an article which I can identify with: Yoga is the practice of dealing with the consequences of being yourself.

Why do I recognise this? Because when I miss out on my yoga practice, I'm often thinking something like:

In the article, Caroline Scherer says:

A wonderful teacher of mine once told me that yoga is the practice of dealing with the consequences of being yourself. I’ve always thought that was a beautifully simple and eloquent way of explaining it.
Besides challenging our bodies and opening our minds, yoga forces us to really live with ourselves in a way that we are not accustomed to doing on a day-to-day basis. It asks us to have honest relationships with our true selves, and embrace those selves exactly as they are.

And if that is the case, which I believe it is, then I’m not avoiding yoga. Yoga has nothing to do with it.

She ends by saying:

The beautiful thing about yoga... is that it simultaneously evokes those feelings and cures me of them. It brings about physical discomfort, then offers spiritual peace. It hurts, but it also heals.

That's what I find too. As they say:  no time on the mat is ever wasted.
Posted by Simon at Saturday, January 19, 2013 No comments:

Email ThisBlogThis!Share to TwitterShare to FacebookShare to Pinterest
Labels: yoga, yoga and life

My thoughts in a song

A couple of days ago I came across the wonderful Dar Williams, singer-songwriter (songwriter-singer?), and her song Christians and Pagans, taken from her album Mortal City.

The song sketches out what happens when an American family gets together for the Christmas holidays. Some members of the family are Christians, others are pagans. Dar doesn't try to make one group better than another; she simply tries to show that the season (Christmas/Yule) can be celebrated by those of many beliefs.

The choruses of the song vary slightly. Here's the first:

So the Christians and the pagans sat together at the table,
Finding faith and common ground the best that they were able,
And just before the meal was served, hands were held and prayers were said,
Sending hope for peace on earth to all their gods and goddesses.

I've listened to the song several times in the last few days. One line sticks in my mind - it's from Jane, the mother of the pagan family, as she speaks to her (Christian) nephew at the dinner table:

...it's true, your cousin's not a Christian,
but we love trees, we love the snow, the friends we have, the world we share,
And you find magic from your God, and we find magic everywhere.'

Something about this line makes me want more, makes me want to find the magic everywhere. It says something which Christians seem to find it hard to do, or at least to express.

The song makes me wonder where I would sit at that table. On just one side, or on both?