Getting to the point

Like many writers, I am deeply interested in not only what people write, but how they write. And by that I mean literally what they write with: the medium they use to get words onto paper.

Up to the early 1990s, most writers would have used a pen or, perhaps, a typewriter to express their thoughts or to craft their story. But from that point onwards, the use of a computer became a possibility for more and more people. And in the last 30 years or so, we have gone from desk-bound systems to hand-held devices via voice-recognition and stylus input. In recent years, writers have pondered (and shelled out money on!) devices as diverse as the Palm Pilot and the Psion Series 5 in search of the perfect way to write.

The creators of such technology promised us the future, gave us yet another operating system to learn and left us with one more collaboration of metal and plastic to file away in the kitchen drawer. The paperless utopia that so many spoke of never arrived. But the writer's search for the perfect method continued.

As part of my own search, I came across this article a few months ago which reappraises the role of the humble pencil. Unlike the many smart technologies which are available to the writer, the pencil is pretty much foolproof. As the writer of that article says:


The world's most-used writing implement happens to be the least expensive.
It never crashes or dries out. It works in outer space, underwater and everywhere in between. Technical support consists of a sharpener.

Since then, I've been slightly obsessed the pencil. I've been reading numerous articles about those who regularly use them for their own writing, and have been investigating - and investing in - some of my own, including the Mitsubishi Hi-Uni and my favourite, the Tombow Mono100.

As I've spent time using them, I've found that the pencil has made a huge impact on my writing. Firstly, there is the advantage of writing by hand rather than using a keyboard and screen. There is a lot of research to show that we think more freely when we write by hand, and that the act of writing by hand forges useful links between thought and movement.

Secondly, I find that I write more efficiently by hand. When I use a keyboard to write an article on the screen, as I'm doing now, I'm thinking as I type. I spend a lot of time deleting and rewriting sentences and even whole paragraphs. But when I write by hand, I find that I tend to form the next sentence fully in my mind before committing it to paper and, as a result, I rewrite only a handful of words. This picture of one of my recent sermons suggests that writing by pencil is still a viable option in the 21st century. I also love the way that it has a sense of personality and character. 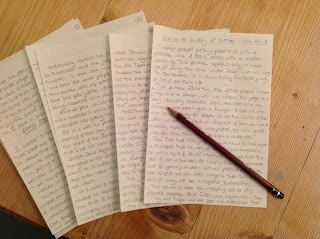 Sermon for the 21st Sunday after Trinity, with a Mitsubishi Hi-Uni pencil, grade B

But is this just a phase in my writing? After all, I once owned a Psion Series 5 and considered it to be the solution to all my needs. (Needless to say, I no longer have it.) I guess it's possible, but when you're already using the simplest, cheapest form of writing tools, why make it any more complicated?
Posted by Simon at Saturday, October 22, 2016 No comments: